Traffic flow analysis as the basis of an intelligent transport system

Traffic flow analysis as the basis of an intelligent transport system

The purpose of creating an ITS is to increase the mobility of the population and ensure traffic safety. The implementation of ITS all over the world follows the path of automation of regulation of the movement of land transport. Today, there are not enough technologies to implement the tasks of implementing ITS. This is the main brake on the development of smart city systems in Russia. One of the most important steps in automation – data collection – is based on extremely time-consuming processes. Until now, the most common was the manual method of recording movement. You cannot integrate it into an intelligent transport system, which implies traffic management in the mode 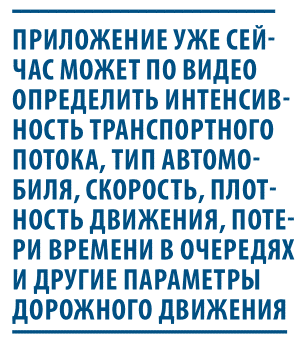 real time. In addition, the manual method requires additional time to organize the process and double-check the data. Now we can only be informed about traffic jams, which have already formed as a fact. But no one can predict where the congestion will occur, and all this is due to the lack of data, on the basis of which it is possible to model the entire situation in the urban road network. Solving this problem requires taking into account many variable factors, an integrated approach and constant updating. Those. ITS makes sense only if the solutions it offers are based on constantly updated data. With the development of neural networks, software applications appeared that, using computer vision, can recognize cars with an accuracy of up to 95%, distribute them by type and direction, determine their speed, parking time, count the number of cars in queue, etc. This allows not only automate the data collection process, but also customize it in accordance with the specific task of the ITS. It is precisely this kind of development of systems to improve the quality of traffic management that the Russian startup TrafficDate is engaged in. The application of the same name TrafficData can already determine the intensity of traffic flow, type of car, speed, traffic density, loss of time in queues and other traffic parameters from video. At the moment, “smart parking” is under development. Thus, TrafficData turns any CCTV camera into a wide-profile contactless sensor. In this case, you can use the existing hardware base of video surveillance of the city.

For the first time in Russia, transport and economic surveys were carried out using artificial intelligence in October 2019. As part of the design of the “Northern Bypass of Perm” facility, carried out by JSC “Institute Giprostroymost”, the traffic intensity was recorded by means of video filming from an unmanned aerial vehicle and subsequent analysis of video materials using the TrafficData software package. In the course of this work, the survey of the road situation was carried out by quadrocopters at 8 registration points simultaneously. 200 flights were carried out, 50 hours of video were processed. As a result, it was possible to obtain the intensity not only during peak hours, but also to deduce the real intensity distribution during the day. Thanks to the TrafficData software, which allows you to analyze such a volume of video information in the shortest possible time, there is no need to use the non-uniformity coefficients to determine the average daily intensity given in the ODM 218.2.020–2012 “Guidelines for assessing the throughput of highways”. It is known that these coefficients are determined on the basis of measurements made on the Moscow Ring Road with the help of sensors (see the Dissertation for the title of Ph.D. “Regularities of changes in the intensity of urban car traffic”, Mendeleev G.A., 2001) … In essence, these data are a special case, and can be extended to the whole of Russia with a big stretch.

After you have the video in your hands, in order to get it you need to do just 4 simple steps:

Today TrafficData has the following characteristics:

TRAFFIC MONITORING SYSTEM BASED ON TRAFFICDATA

The TrafficDate company has developed a project for a Traffic Monitoring System (hereinafter referred to as the SDM) for 300 sections. The entrance and exit of each section is equipped with cameras. The system monitors traffic 24/7, fully automatically, covering all the requirements of the Orders of the Ministry of Transport of the Russian Federation No. 114 and No. 479. For the implementation of this project, two technologies were combined: license plate recognition and vehicle video image detection.

At the same time, after deep optimization of computer vision algorithms, it was possible to reduce system requirements so much that it made it possible to manage a network of 100 cameras with just one server in streaming mode! The need for data on traffic flow is so necessary that the Ministry of Transport of the Russian Federation is ready every year. For the implementation of this project, two technologies were combined: license plate recognition and vehicle video image detection. License plate detection (left) and traffic analysis (right) of cars by video image. Output of traffic parameters. to set up one person for every 300 m of the road to collect them. At the same time, the quality of such data leaves much to be desired. With the help of the SDMD, which the authors propose to equip the network of surveyed roads, this data can be obtained every 5 minutes. with an accuracy of 95%. The cost of this system will be only 100 thousand rubles. per kilometer. Thanks to such developments, the idea of ​​implementing an intelligent transport system becomes possible. With the help of TrafficData, labor costs for collecting data on traffic flows for an intersection, a road section are significantly reduced, and traffic monitoring is automated. Video cameras equipped with such software will recognize the traffic situation in the city, send this data directly to simulation systems, which, in turn, will calculate the best options and distribute traffic flows so that we can easily and safely get from point A to point B. Every city, especially a “smart” one, needs uninterrupted and safe movement of land transport. Therefore, ITS in the coming years will be one of the key areas of development of the transport infrastructure of megalopolises and agglomerations.

Chat with a consultant